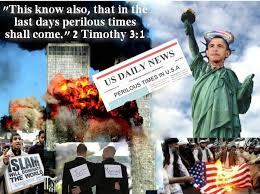 There are great suffering and sorrows lying immediately ahead of us. As such, the veil has now been lifted and the enormity of the global crisis that we find ourselves in is clear for all to see.

Chaos seems to surround us and carnage is visible where ever one looks. Terrorism, violence, crime, civil unrests and rioting is now prevalent throughout the entire world and at a historical all-time-high. It is as if a “great evil” has descended upon the earth, causing everybody to go completely insane.

In fact, many experts now warn of a “global catastrophe of Biblical proportions” and which is on the cards for 2016/2017. They predict that an “Extinction Level Event” may soon befall mankind and that, entire countries, nations, governments, cultural and ethnic groups will disappear.

In this regard particular reference is made to the following immediate global threats:

However, many people are still oblivious of the dangers that exist around us while others simply refuse to accept the reality of the times that we live in. They prefer to cling to their foolish belief that the global political leadership and the media would never lie to the public; that mankind is so clever that he would always be able to devise plans whereby he can avoid a catastrophe; and that the Earth would continue to exist forever.

If only things were so simple – but unfortunately it is not and if one were to do the mathematics, one would quickly see that the sums just do not add up and for the following reasons:

The above certainly paints a grim picture of doom and gloom – but it is unfortunately the truth. It is the stark reality and by pointing out the obvious is most certainly not an attempt at “fear mongering”. It serves no purpose to try and “sugar-coat” the obvious and looming disaster that is unfolding.

Those who are in denial simply don’t want to hear the truth – as they do not want their illusions destroyed.

The simple fact of the matter is that the global economy revolves around the USA and the US Dollar, and if the United States “gets a cold and sneezes”, then the rest of the world “lands up in hospital with pneumonia”.

The current dilemma is that the USA has a “debt ceiling” of almost 20 trillion dollars, and that they are for all practical purposes (like so many other countries), totally bankrupt. The only reasons why the USA has not defaulted on repayment of this debt, yet, are because the US Dollar is the Reserve Currency of the World, and that trade in all oil transactions throughout the World are being conducted by means of the Petro-Dollar.

This certainly gives the USA a big advantage over other countries, and in order for them to be able to keep on repaying their debt, the US Treasury therefore simply lifts the “debt ceiling” and prints more money. Money which is essentially worth nothing, as it is backed by nothing, but debt.

Russia, China, and a few other countries have come to realize this and are now pushing for the US Dollar to be cancelled as the Reserve Currency of the World – and some countries have already started to abandon the Petro-Dollar in oil trade.

Russia and China of course also having their own hidden agendas and wanting to expand territory and global influence. In this regard they have in recent years made a rush towards the gold commodity and now have some serious reserves in stockpile.

The danger that all of the above now poses to the USA and its economy is obvious – and the USA can simply not afford for the US Dollar to be cancelled as the Reserve Currency of the World, nor for the Petro-Dollar to be abolished.

So what we have here are two opposing sides, both with nuclear capabilities, ready to do battle. The stakes are high and neither side is willing to back down. It is a simple matter of world dominance, and some countries have made their intentions clear of wanting to have total control of the land, sea, air, outer space and cyberspace. Thus and in order to achieve that, a thermal nuclear World War 3 now seems to be the only option left.

In this regard, the strategic moves on the “global chessboard of geopolitics” have been completed, nuclear arsenals have been revamped and stockpiled, ships, planes, tanks, missile batteries and other military hardware have been deployed in allied countries and combat troops are holding war exercises all over the world.

So therefore now, in 2016, we find ourselves to be living in a very troubled world and one in which very little makes sense anymore.

The obvious questions being: “How did humanity get to this point, who or what is responsible for this big mess that we find ourselves in and how did we allow all of this to happen?

The sad truth of course being, that much of what is wrong in this world can only be blamed on ourselves and our own actions. We human beings, as the collective of this world, must accept responsibility.

We have become a godless people and many have turned away from God. Others dare to question the very existence of God, preferring instead to believe in totally unproven scientific theories in an effort to try and explain away the existence of mankind and how we had came about in the first place.

Bible Prophecy gives us a clear warning about that which is to happen in the “End Times”:

Indeed we are now witnessing drastic changes taking place throughout the world and like no other time in history before – with much of what is happening being a total abomination and insult unto God.

But there is also a part of what is currently happening in this world, which is not entirely the fault of the normal citizenry. Experts blame that particular part on a “secret agenda” which is being driven by a “secret society” – and to which only a few members of the global elite belong. It is essentially an exclusive club – and the members that belong to this club are some of the politically most influential people, bankers, the wealthiest people, media moguls, high-tech experts and the greatest scientific minds in the world.

And yes, you and I cannot become members of that club and we are definitely not invited to attend their party.

We are the nobodies, the expendables and we have absolutely no real say in that what is about to happen in this world that we are living in. The members of that “exclusive club” make those decisions on our behalf, but serving their best interests only.

It is a time of great deception, disinformation, betrayal and many falsehoods. It is therefore notable from a recent survey that less than 10% of all people in the world now entirely believe their governments, and that less than 10% of all the people who watch and read the news believe that news to be a hundred percent true. People have come to realize that much of what they are being told is purely propaganda and that some media has simply become a mechanism through which a sinister agenda is being driven.

Governments all over the world seem to be at war with its own citizens, and are increasingly suppressing and spying on them. Draconian Secrecy Laws are swiftly in-acted to keep the truth out of the public domain, and free-thinking and free-speech are rumoured to soon be a thing of the past.

Humanity has in recent years been carefully maneuvered towards embracing a very dangerous doctrine: “Do what Thou Wilt shall be the Whole of the Law”. This is a completely false and flawed belief system, and advocates the following:

The above mark the current age that we live in. It is a very dangerous attitude to have and only serves to fuel the absolute chaos, carnage and stupidity that surround us in the world today. It is also contradictory and in direct conflict to the Instructions of God as is set out in the Biblical Scriptures and in the Gospel of Jesus Christ.

Mankind has become drunk with his own self-importance – his lust after money and power being simply insatiable.

What we see around us in the world today is “humanity-gone-insane”. We are like a horde of trapped “rats in a box”, with nowhere else to escape to – and we will soon begin feeding on one another.

We have, through our reckless behavior, scarred the earth irreparably and have all but destroyed nature:

Thousands of birds are falling from the sky, dead. Millions of fish are washing up on the shores, dead. Beasts of the land are dropping dead in great numbers – and nobody seems to be sure why.

There are severe droughts in some places, extreme flooding in other. Earthquakes, hurricanes and tornadoes are increasing both in number and intensity. Record temperatures in all of the history of humanity are being recorded all over the world.

Crucially, there seems to be wildfires everywhere in the world, destroying millions of hectares of forest and vegetation – significantly reducing the very mechanism of nature that supplies humans with the one element without which they cannot live: oxygen. And with the billions of tons of Carbon Dioxide, Methane Gas and other pollutants that we as modern man are pumping into the atmosphere every day – who knows just how long we will still be able to breathe?

There is in fact an alarming energy build-up on our planet, which equates to the same amount of energy that would be released if four Hiroshima-type atom bombs were to be detonated every second of every day. Compare that to the similar effect that the detonation of four hundred thousand nuclear bombs on a daily basis would have on our planet?

But of course the global elite know all this and also that the world in its current format is simply no longer sustainable.

The experts therefore propose that what we are now witnessing with all the chaos, carnage and madness taking place around us, is the formation and implementation of some kind of global dictatorship – and that the very idea of a global martial law in the near future is not so far-fetched anymore. It is indeed a move towards a “New World Order”. . . . . . . something which many politicians speak about openly these days. . . . . . . . .but of which implications and enormity the general public is still completely unawares of.

All of the above seems to be inevitable, together with the probability that many amongst us will soon have to die as part of the Global Reset. But it does not propose that the world will end tomorrow; just that it will be very different from the one that we live in now and probably with far less people around.

For those who have awakened and who are now concerned about what they can do about the troubling times that we live in, the advice would be simple: Turn away from your evil ways; find and surrender to God; repent, ask forgiveness and make things right with God; and pray like never before in your life.

“Science has produced such powerful weapons, which in a war between great powers, there would be neither victor nor vanquished. Both would be overwhelmed in destruction.” John Boyd Orr